Rice pudding has been on my mind lately and decided today would be a good day to make it. Señor O and I had a pretty heavy brunch on Sunday and today’s lunch was also on the hefty side, so no official meal was cooked today, leaving the afternoon open for a simple dessert.

I’ve only made rice pudding once before, the reason being I was pretty grossed out by it in the past; the texture was all wrong. However, riz au lait was part of my culinary school curriculum and it was during Session 19 of Level 2 that I was properly re-introduced to this dessert. I liked it. Lots.

In preparation for this afternoon’s riz au lait, some research was conducted. Joy of Cooking, Julia Child, Doña Angélica, and a number of random websites all cooked the rice in water prior to combining it with milk. My school’s version mixed them from the get-go, then baked for about 40 minutes. Easy enough.

There was no trouble at school, but of course, there was here. At the end of the designated time I pulled out the rice, and to my dismay, it was still drenched in milk. It hadn’t puddinged at all.

I was not smiling. This was supposed to be a breeze.

I moved the dish to the stovetop and decided to revert to methods I’d read about, namely stirring till most of the milk was absorbed. It was at this juncture that the bottom of the pot began to turn nasty and brown. I poured out the swamp rice into a new glass Pyrex and called it quits. I didn’t have another suitable container if this one scorched, so that would have to be that.

A lot displeased and not a little bit chagrined, I made one last, desperate attempt to save – or at the very least conceal – my rice pudding. I put it into a crème brûlée mold, sprinkled it with sugar, and torched it.

My pyrotechnics did the trick, and the rice was delicious, but I’m still bothered. What was meant to be a single-dish, super-easy to prep dessert turned into a major dish pileup. Next time I’m going stovetop all the way. And I might try coconut milk and pineapples instead of vanilla bean and orange zest. 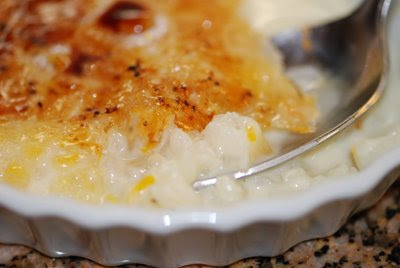 P.S.
The rice pudding was perfectly delicious a day later. It’s cold and refreshing, all vanilla bean-y and citrusy…which has prompted me to print the recipe: