Arroz con pollo means chicken-and-rice, but the colorful flavors and ingredients of the popular Nicaraguan dish are lost in this very literal translation.  Also called arroz a la valenciana (probably a nod to Spanish colonizers and paella) arroz con pollo is a mixture of the title ingredients, plus ham, sausage, pimento-stuffed olives, capers, peas, carrots, and bell peppers. Topped with a generous grating of Parmesan cheese and often served with buttered toast, it’s one of my favorite things to eat; maybe it’ll become one of yours, too.

ARROZ con POLLO or ARROZ a la VALENCIANA
Serves 8 to 12
This is a somewhat involved recipe, but it makes piles of food; great for a big family, a casual dinner party, or days’ worth of leftovers. The recipe can be easily cut in half if the yield seems excessive.

Some shortcuts: Rather than cooking carrots with rice, add 2 cups of frozen peas-and-carrots to the mixture.  Buy a rotisserie chicken and low-sodium chicken broth instead of poaching your own fresh chicken pieces.

– Place chicken pieces in large soup pot or Dutch oven. Season with salt and cover with cold water (chicken should be submerged 2 inches). Add onion, bell pepper, garlic, and peppercorns. Bring to a boil over high heat, then immediately reduce heat to medium-low and simmer until chicken is cooked through (temperature should read 160˚F), 30 to 35 minutes.

– Transfer chicken to large bowl. When it’s cool enough to handle, remove and discard the skin and bones and shred the chicken into bite-sized pieces. The chicken may be poached one day in advance: To store, add 3 cups broth to shredded chicken, cool to room temperature, cover with plastic, and refrigerate.

– Melt 2 tablespoons butter in a medium saucepan.  Add the onion and salt and cook until softened, about 5 minutes. Stir in rice, carrots, and tomato paste. Add broth and bring to a boil. Continue to boil until most of the liquid has evaporated and you can see small bubbles on the surface (see How to Make Rice).  Reduce heat to lowest setting, cover, and cook for 15 minutes. Fluff rice with chopsticks or fork and remove from heat.

– Melt butter in a large skillet or Dutch oven. Add sausage and sauté until browned, about 5 minutes. Transfer to plate.

With the chill of autumn comes the inevitable drip, drip, drip of the rain. And the nose. Vegetable soups are perfect to fend off the outdoor and head cold; hardy, healthy, and, if you add a few warm spices like ginger and pepper, hot enough to clear up those sinuses.

CARROT SOUP  with GINGER ALMONDS  & HONEY-PEPPPER YOGURT
Makes 5 to 6 cups
The honey in this recipe enhances the carrots’ sweetness, while the vinegar adds acidity for balance. This soup pairs nicely with peppery arugula. Ginger has a slow burn, so pass on it if you’re planning on serving this to kids. For a vegetarian option substitute chicken broth with vegetable broth.

– Melt the butter in a small skillet over medium heat. Add almonds and salt and cook, shaking pan continuously, until golden, about 5 minutes. Stir in ginger and cook until nuts are coated and fragrant, about 30 seconds. Transfer to plate and reserve.

– Whisk all ingredients together in a small bowl. Refrigerate until serving time.

– Melt the butter in a soup pot or Dutch oven. Add the onion, carrots, 1 teaspoon salt, and ½ teaspoon pepper. Cook over medium heat, covered and stirring occasionally, until the carrots begin to soften, about 15 minutes.

– Add 4 cups of the broth and simmer over medium-low heat until the carrots are completely tender, 20 to 30 minutes. Stir in the honey, vinegar, and cream (if using).

– With a ladle, transfer the soup to a blender or food processor and puree in batches until smooth. Transfer pureed soup to a soup tureen or second pot. If you prefer a thinner soup, stir in some of the remaining broth until you achieve desired consistency. Season with salt and pepper.

– Ladle the soup into bowls and top with yogurt and almonds.

Yesterday I realized I had a little bit of “love” squeezing out from under my apron strings. Inspired by the athletes in town for Head of the Charles, I made a healthy start this morning.

– Combine oatmeal, apple juice, apple, cranberries, cinnamon, and salt in a cereal or soup bowl and cover with plastic wrap. Microwave 3 to 4 minutes until apples are tender.

– Stir in milk (more or less according to desired consistency) and maple syrup.

Now don’t go around spreading this, but every time Wedding Crashers is on TBS, I have to watch it. And at least once a day, the opportunity to quote Chazz comes up… “What is she doing back there? I never know what she’s doing…HEY MOM! The meatloaf! We want it now! THE MEATLOAF!!!” It never gets old.

I would imagine Chazz’s mom’s meatloaf is of the nightmare variety: compact, dried out, packed into a loaf pan. Maybe topped with a squirt of ketchup.  This genre of meatloaf – the bad kind – has been around for ages, and we’ve all had to swallow it down (with difficulty, no doubt) at some point. Why meatloaf keeps making it to the table in such pitiful format is puzzling, but I come bearing glad tidings! Meatloaf can be delicious! Meatloaf can be something you want to eat! Meatloaf doesn’t have to be made in a loaf pan!

Meatloaf really is better when it’s not squeezed into a pan. Thus contained, the beef juices ooze out and create a Jacuzzi-like environment for the meat, which results in a rubbery rectangle of boiled beef. Yuck. But, unfettered and free, the meatloaf develops a nice crust, which contrasts with juicy, tender beef.  I’ve experimented with a few flavor variations, but recently tried a Gourmet version, which incorporates bacon and prunes. You’ll love it.

– Adjust oven racks to upper-middle and middle positions and heat oven to broil. Line a rimmed baking sheet with foil and spray with nonstick cooking spray.

– To make the panade, mash breadcrumbs and milk together in a small bowl; set aside. Process 4 slices bacon and prunes in food processor until finely ground; set aside. Melt butter in medium skillet. Add remaining 2 slices chopped bacon, onion, garlic, and celery and cook until vegetables are softened, 6 to 8 minutes. Stir in Worcestershire, vinegar, allspice, 2 teaspoons salt, and 1 ½ teaspoons pepper.

– In a large bowl combine the panade, bacon-prune paste, vegetables, beef, pork, eggs, and parsley and mix thoroughly with hands. Transfer mixture to prepared baking sheet and shape into a 9- by 5-inch oval. Brush meatloaf with about ¼ cup of glaze and broil until well browned, 5 to 7 minutes.

– Reduce oven temperature to 350 degrees and transfer meatloaf to middle rack. Bake until temperature registers 160 degrees, 35 to 45 minutes.  Remove meatloaf from oven, slide onto serving platter or carving board, and let rest 20 minutes.

– While meatloaf rests, bring sauce to a simmer over medium heat and cook until slightly thickened, 6 to 8 minutes. Serve sauce with meatloaf.

Pie crust can be daunting. I know numerous cooks, professional and amateur, that don’t relish the thought of making it. I’ve always found making pies a soothing activity, but did have a lousy, nightmarish episode with crusts recently that almost made me break out in hives. Anyway. I won’t make you break out into hives or develop an eye twitch. This pie crust lesson is tedious and longer than the recipes I’ve been posting lately, but holiday season is fast approaching and maybe you’d like to try your hand at it, get some practice, so you can bring something “wow” to your family dinner this year.

HOW TO MAKE PIE CRUST

I rarely cook or provide recipes using the metric system, however, when it comes to pie crust I dutifully unwrap my scale and press the “grams” button. I’ve translated the measurements to cups and tablespoons, but I do prefer the certainty of the scale.

The following recipe is applicable only to the pastel de piña (pineappple pie) that follows. I read and reread my mother’s recipe for the Nicaraguan bakery staple, and unconventional as it is, it’s traditional. Normally, a tart or single crust pie such as lemon meringue is made by “blind” baking the crust: the tart mold or pie plate is lined with pie dough which is pricked to prevent puffing, lined with parchment or foil, weighed down, and baked prior to being cooled and filled. A double-crust pie like apple pie is filled raw: the pie plate is lined with pie dough, filled, and topped with a second, vented crust or with a latticed top, then baked.

Pastel de piña uses an unorthodox combination of the two methods: the crust is blind baked, filled, then topped with a lattice and returned to the oven.
PÂTE BRISÉE with EGG
Makes a double-crust for an 8- to 9-inch pie
Don’t skip any of the resting or chilling periods in the recipe, unless you want a shriveled, shrunken, or tough crust!

– Form a well in the center of the flour mixture and pour in the eggs plus 1 tablespoon ice water.

– Working quickly, use the bench scraper to cut in the eggs and water. If the mixture appears very dry and crumbly, add water, 1 teaspoon at a time, until the mixture is cohesive but not overly wet.

– Bring the dough together with your hands. Pinch off pieces of dough (about 2-inch pieces) and with the heel of your hand extend on the surface. This method, called fraisage, ensures that the butter is evenly distributed in the dough. Shape the dough into a ball and cut it in half. Shape each half into a disc and wrap in plastic. Refrigerate for 30 minutes.

– On a lightly floured surface, roll the dough out to about 10 inches in diameter. Gently fold the dough into quarters and transfer to an 8-inch tart shell. Unfold the dough and press it into the shell. Trim off excess overhang and lightly prick all over with fork. Transfer the lined shell to refrigerator and chill 30 minutes, then, freeze for 20 minutes. Preheat the oven to 375˚F.

– Roll out the second dough disc on a piece of lightly floured parchment paper to 10 inches in diameter and cut into 8 1-inch-thick strips. Slide parchment and strips onto a baking sheet or jelly board and refrigerate.

– Line the chilled shell with foil or parchment paper (not wax paper!) and fill with pie weights or dry beans. Bake until the dough looks opaque, 20 to 25 minutes.

– Fill the pie shell with the pineapple mixture (see recipe below). Following photo 13, lay out four dough strips across the pie at about 1-inch intervals. Then, starting in the middle, lay one additional strip perpendicular to the original strips. Carefully weave the strips into each other, following figures 13 to 16.

– Beat the egg yolk, cream, and salt in small bowl. With a pastry brush, paint the egg mixture over the lattice top. Bake until golden, 30 to 40 minutes. Transfer pie to wire rack and cool to room temperature, 1 to 2 hours. 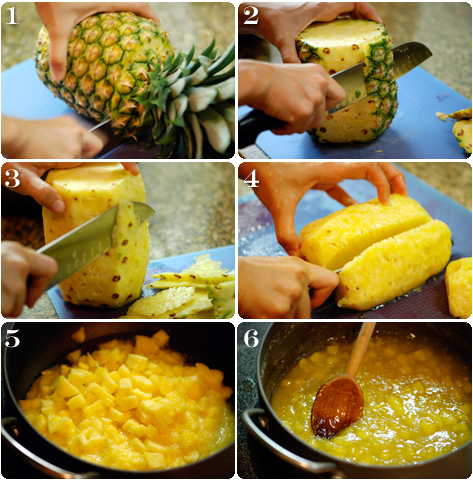 To prepare the pineapple:

– With a chef’s knife, cut off the crown of leaves and about 1 inch from the base. Stand the pineapple upright and cut the prickly exterior off. If there are any “eyes” left, trim them.

– Transfer half of the pineapple chunks to a food processor and pulse until pineapple is a thick puree.

– Transfer to a large pot.

– Whisk cornstarch and water together in a small bowl and stir into pineapple. Stir in the sugar and salt.

– Bring the pineapple mixture to a boil and simmer, stirring occasionally, until deep golden and jam-like, 45 to 60 minutes.  Off heat, stir in butter.

– Fill the blind baked crust and continue to recipe above.