I made an apple tart on Thursday and I felt a whole lot better about everything. Apple tarts are very soothing. They should change that well-known saying to “An apple tart a day keeps the doctor way.” Also, I’ve been interning at a catering company and worked my first event on Saturday night – all went smoothly and I have thus regained some confidence. Perfect timing, too, as I was swimming much too close to the deep end.

In other news, some of my classmates’ true colors have begun to shine through and they are not very flattering hues. Stereotypical tempestuous chefs in the making! Beware! Part of today’s assignment was to make fresh noodles certain pasta machines weren’t cooperating. One guy took this inanimate object’s offense quite personally and he became quite violent with it. One second the thing was attached to the counter and the next it was on the floor while its crank was in the hand of the raging perpetrator. Dismembered kitchen appliances. Oh the horror!

Speaking of horrors… The fish du jour was flounder and there were a couple extra leftover at the end of class so my partner was charged with filleting one of them. I was standing by and the gutting was going on as normal when all of a sudden a rather outsized “gut” was pulled out. It was quite unusual – larger than an egg sac and firmer. Filled with morbid curiosity, I asked my partner to “Just cut the thing open! Let’s see what’s inside!” It was the fish’s final repast! It was an actual whole fish inside the flounder! Like a man condemned to death, it had devoured one last meal! It was grotesque, now that I think about it. Too bad I didn’t have my camera today. I would have loved to share the gore with you. 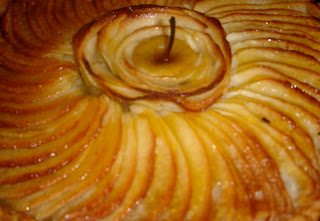