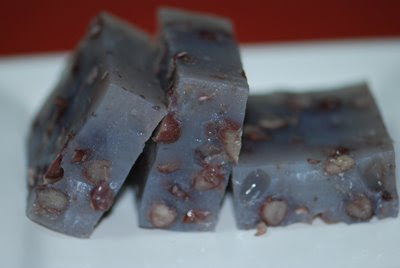 I took Señor O to Gitlo’s last week, where he was properly inducted: we ordered daikon cakes and pork buns – reruns for me, but just as tasty as the first time – as well as chicken dumplings, crunchy taro spring rolls filled with pork, shrimp, and black mushrooms, and a second order of dumplings, because they were that good; soft purses stuffed with savory chicken and tender cabbage, gently sautéed to yield a slight crunchy exterior.

Too full to order any more food but eager to plow through the menu in its entirety, I settled on a drink: milk tea with boba. The tiny and swift-moving waitress Wendy explained boba was tapioca, and though this cat is not quite a fan, curiosity often overcomes it. The first thing that struck me was not the blueberry-looking orbs sitting at the bottom of the glass, but rather the electric blue, ultra-wide straw that was stuck in there. I could fit my pinky in it! Clearly, the straw was designed to comfortably suck up the boba balls – clever, clever. The milk tea was black tea with milk, sweetened and iced; refreshing, but less interesting than the boba. I started sipping, trying to control the suction as I was worried the boba would zoom up and dart to the back of my throat, like a hockey puck about to score. I held it in my mouth and finally bit down, and…it was utterly bland. I was perplexed. Why add an ingredient that does nothing to complement or enhance taste?

Gitlo shed some light. He said people get bored of drinking the same old thing all the time and that adding something like boba would add an element of fun. I remained perplexed; I drink eight glasses of water a day and though flavorless and odorless, it’s never occurred to me to plop tapioca in it. However, I will say this: upon reflection, I did fool around with the straw a bit. I was very tempted to use it as a boba shooter.

The reasoning behind boba’s inclusion in tea was likely lost in translation, nevertheless, further chatting revealed that Gitlo and I have some things in common which are happily interpreted in both Chino and Latino.

Red beans were in both of our native menus, but in surprising ways that were novel to each of us. Gitlo presented Señor O and I with a red bean cake. The beans were suspended in a lavender gelatin that had been sliced into 2-inch-thich slabs resembling custom soap or a slab of marble. The gelatin was actually water chestnut flour which once set is a firm edition of Jell-O. It was cool, lightly sweet, and very odd, my palate being accustomed to tasting beans exclusively in savory preparations. I pointed this out, explaining that my beans are boiled with garlic and salt and then either fried, mashed, mixed with rice, or served as soup. Gitlo has only ever cooked a bean for dessert.

We next had an animated and exclamation-studded discussion about nacatamales and their relatives in China. Regrettably, I can neither pronounce nor spell their name – my lame attempt at mimicry came out like saying “Joan” while sneezing. While the Nica breed is corn masa, pork, rice, potato, tomato, prunes, and a hunk of lard wrapped in a plantain leaf, Gitlo’s version contains sticky rice, peanuts, a variety of bean, sausage, Chinese five-spice powder, and bacon wrapped in bamboo leaves. Apparently, this buffet-in-a-bundle was once on the menu, but Gitlo’s ma wouldn’t listen to him when he said the hunk of fat in there would frighten the customers. I sympathized with his ma – when I was a kid I was horrified by the piece of jiggly lard in the nacatamal, but I learned better. If you mash the lard into the masa, it melts and infuses the whole thing with an inimitable porky flavor. The fat must stay. I’ve been promised a Chinese tamal next time I visit and am very excited at the prospect.