I was about two years younger than most of my classmates through junior high and high school. It was a terrible ordeal. While I thought I was mentally and psychologically on par with everyone, I knew for a fact that physically, I was way, way behind. The gawky teenage years were magnified and multiplied, tragically, for me. I had braces and breakouts well into my junior and senior years, and most dooming of all – I was completely flat chested. I had no hope of ever catching up.

High school is far behind and though I remain somewhat impaired in the aforementioned area, I have moved past it. Or so I thought.

Recent activities in my kitchen have shown that I am not as over flatness as I thought. For the past few days I have been on a quest to bake the perfect muffin. Though a firm believer in “it’s what’s inside that counts,” I’ve been unable to turn a blind eye to aesthetics. Why is it that 99{7e75139007ced55322cd19a88b90f170970c9802fa5abc2ce00631fcd14484e3} of these muffins refuse to blossom? I’ve creamed, I’ve smashed, I’ve gently folded, and roughly chopped, but seemingly to no avail. There they are, the woefully prepubescent little things, strewn all over the kitchen counter. And of course, as might have been expected, there is a Barbie to these muffins’ Skipper: one recipe yielded gorgeous cupolas, and try as I might, I cannot get the others to do the same. These weren’t the tastiest of the twelve batches I’ve thus far prepared, but in high school and in life, it’s the tall busty blonde that’s noticed first, and so I continue to bake, searching for a muffin that has both brawn and brains. Should I create this Wonder Woman of a cake, I will post the how-to. In the meantime I remain, 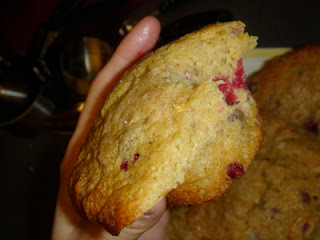