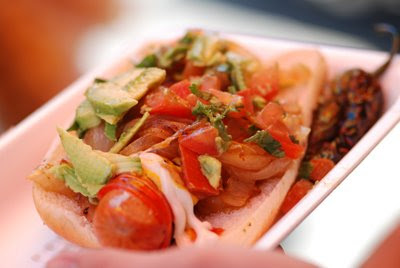 I was in LA for a few days, and, despite the fact that I spent my nights sleeping in my brother’s bachelor pad from hell – sorry, Charlie, but it’s true: the place was a wreck, a combination opossum refuge and crack den – it was a good time. I absolutely love LA, especially the heretofore unexplored food scene. In the span of a week I had Thai, Korean, Spanish, Mexican, French, Italian, and good ol’ American – a veritable “It’s a Small World” for gluttons. I’m no food critic, but some of my eat-outs must be described.

At the top of my list: Honey Pig Korean BBQ. Up until my journey to Koreatown, my experience with Korean cuisine had been limited to the Momofuku Ssäm and Noodle Bars in New York. Don’t misread – the Momofukus happen to be among my favorite NY spots, but Honey Pig is a whole other animal, and I was completely unprepared for what I encountered there. 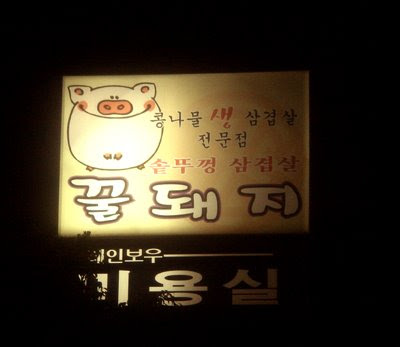 We asked to be seated, at which point the waiter whirled around our appointed table like a dervish-meets-Chinese-plate-balancing-act, dropping little plates and saucers and bowls and then more plates and saucers and bowls with sauces and oils and lettuces (oh my!) all around, till there is not an inch of tabletop visible. In the middle, rising like cupola from a crowded city center, The Inverted Wok Thing. Our awed foursome sat, giggling and gawking as the waiter zeroed in on a tiny dial in the tabletop (Gadzooks! You yourself can control the heat!) and started throwing kimchi-covered cabbage and bean sprouts on the base of Wok Thing. 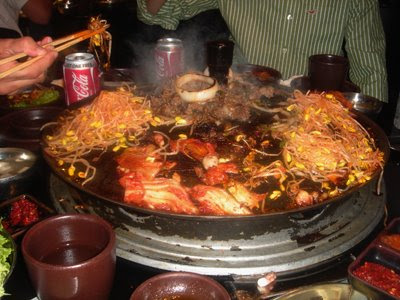 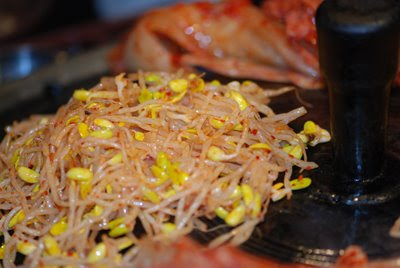 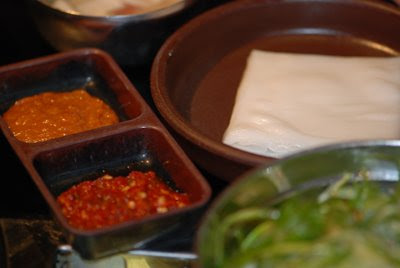 We stared, stupidly, not knowing at all what to do with the food. Were we supposed to eat it? How long did we have to wait for it to cook? Were we allowed to touch it? Desperately, we looked around at the other tables attempting to discern the how-tos of KBBQ. I try to make eye contact with any of the passing waiters, but my silent SOS went unnoticed. I flailed my arms and a harried-looking man finally come over. “Uh, I’m sorry, excuse me,” I muttered, unintelligibly and in near-whisper, “Umm, we’re, like, new to this whole BBQ thing,” nervous giggle, “umm, uhh, how do we order?” More vexed looks from the waiter who instructed in a few terse fragments to order four portions of pork belly and one of beef. Now, novice though I was, I thought four portions of pork belly sounded a bit piggish, so I ordered two and one sliced beef. The waiter scurried away.

I’d forgotten to order drinks, so once again, I started casting frantic looks at the wait staff while they continued to ignore me. I began to feel unwelcome, out of place. I hung my head, pouting, and that’s when I realized I was not being ignored; I was just not following protocol: there was a doorbell on my table, hidden under a tiny bowl of pungent red sauce. One is meant to press down on it if and when one needs service. I pushed down, and, wouldn’t you know it, my finger was still on the button when someone materialized at my side. Mercifully, this lady was kind and took pity on us lost sheep. She started snipping the cabbage into bite-size pieces with the aid of slender tongs and shears, and piled them up on the highest part of the dome. “OOOhhhhh,” we mouthed. Next, she lay the pork belly on the wok and it started to sizzle. Once cooked, she, with a deft hand, natch, picked up a piece with a pair of shiny metal chopsticks and quickly dipped it in one of the small bowls, this one containing sesame oil, salt and pepper. The now-seasoned belly, some cabbage, bean sprouts, and thinly sliced green onion were piled on a large and crisp lettuce leaf, which she wrapped. We understood! We got it! We could finally eat!

We were congratulating ourselves on our powers of international comprehension until we started trying to imitate her maneuvers. Turns out metal chopsticks are not for neophytes– they’re slippery and food kept dropping on the way to the plate. We longed for forks, but were too embarrassed to ask. We would eat with slippery sticks even if it took us hours. Someone spotted wooden ones though, and once we had those in hand, things went rather smoothly.

We’d eaten through most of our pork belly and were feeling pretty full when a waiter ran by and without even glancing at us tossed an octopus tentacle on Wok Thing. “We didn’t ask for this!” we yelped, but he only said, “It’s free!” and continued on his way. Meanwhile, another waiter restocked our cabbage and sprouts. We began to get nervous every time someone neared the table, worried more food would appear unannounced. Besides, we still had a mound of thinly sliced beef waiting to be cooked. 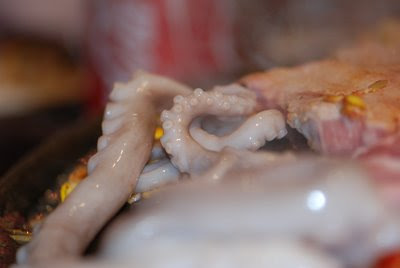 After the deliciousness of pork belly, I worried the beef would be a letdown. But it was actually my favorite. Our kindly waitress plopped it on the heat and said, “Very delicious with rice.” I just nodded, defeated, and heaved a deep sigh. I would just have to create more space for the rice. It was orange, and in a bowl, mixed with bits of lettuce and seaweed. She plopped it on top of the beef and started raking up the remaining cabbage and sprouts, mixing it all together. It was my favorite part of the meal. Everything had just enough spice and salt, and at the base of it all, a gentle sweetness that gently played with the underlying heat. I’ve added Korean BBQ to the list of foods I crave, and wish I could install a Wok Thing at my table – it’s one-pot cooking at its best. 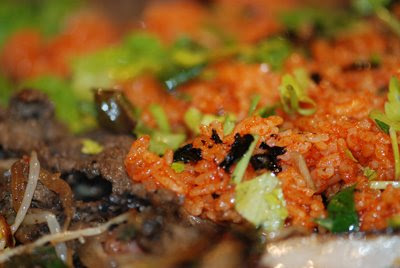 Next up: BACON-WRAPPED HOT DOGS. Months ago, New York Magazine wrote about Crif Dogs, an East Village spot selling deep-fired wieners. Apparently, some genius there decided to give David Chang (creator/chef of the above-mentioned Momofukus) a namesake dog and thus came about the bacon-wrapped-deep-fried-kimchi-topped-hot-dog. I haven’t had the chance to sample this delightful monstrosity, but have spent ample time drooling over its photo. How happy was I then to learn that you can get a bacon-wrapped hot dog in LA? Naturally, I had to have one. Little brother and cute girlfriend took me downtown where we walked through blocks of knock-off bags and tight, neon-colored clothes looking for a… let’s say artisanal hot dog cart. Cute GF instructed us to bypass brick-and-mortar stands because what we wanted was true-blue street food. For a while it looked like it wasn’t going to happen for us and that all we were going to get out of this trip were some snazzy $4 “designer” shades, when we saw (and smelled!) it: a teeny vehicle, no bigger than a golf cart, equipped with a glassed-in flattop and Coleman cooler stocked with Jarritos – Mexican soda pop – and a bowl of coarsely chopped avocado and pico de gallo. 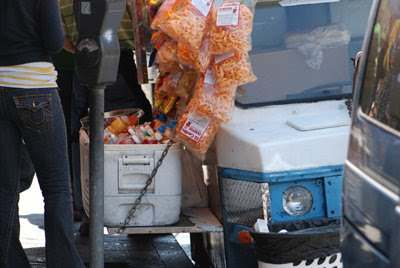 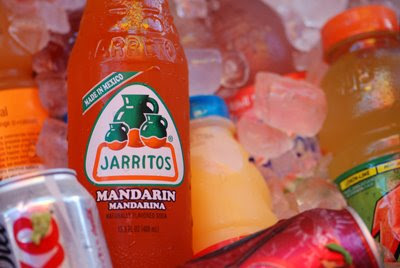 The bacon dogs sizzled alongside sliced onions, green peppers, and jalapeños. I’m sorry Gray’s Papaya, but you’ve been dethroned! The vendor tucked the sausage into a bun and drizzled it with yellow mustard, ketchup, and mayo (!), then topped it with everything in his reach, including the chunky guacamole. It was absolute bliss, and 100{7e75139007ced55322cd19a88b90f170970c9802fa5abc2ce00631fcd14484e3} worth the gut-wrenching heartburn that followed. 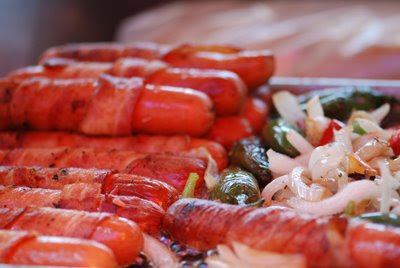 On a sad note, it seems bacon-wrapped hot dog purveyors are being persecuted by the health department. It’s an outrage! Check out Drew Carey’s inspired report on Reason.tv. Potentially harmful food? Puh-lease. Let’s not get started on the Golden Arches, et al. 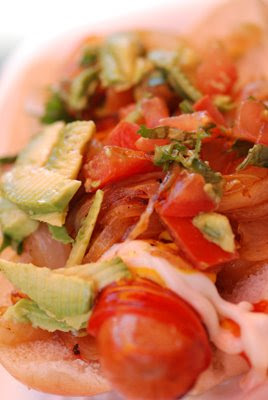