There are certain fruits back home that are not easy to come by in the US, even in the southernmost extremes of its geography. Some, such as nancite, a cranberry-sized fruit of bright yellow skin and white interior with a gaping belly button that exudes a heady and nauseating stench, I am happy to be safely away from, but others like sapote and níspero I crave. Sapote is rather like an avocado in shape and flesh texture. The exterior of the footballesque fruit is brown an rough, but the inside is buttery, smooth, and rich terracotta orange in color. A glossy black seed is tightly wedged into the velvety flesh. Sapote is for the persevering only, as it will frequently be filled with wriggling white maggots or be ripe to the point of fizzy fermentation. Should you chance on a perfect one, though, you will be rewarded. Decadent, it coats the palate and tongue with buttercream texture and aromas of exotic dark chocolate and mellow spices. 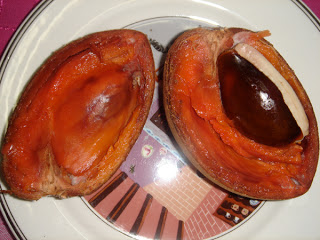 Níspero skin is also dull brown and coarse, and while its interior is not as rich and smooth as sapote, it does share with it unusual flavors. Níspero is grainy and fibrous, like a cat’s tongue. Redolent of chocolate and moss, it smells of earth dampened by rain, moistened cedar, and secret hiding places. 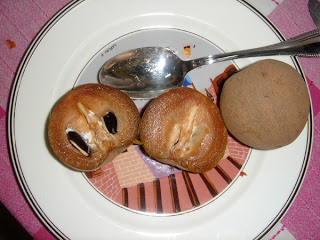 Other fruits, like guayaba and jocote were not yet in season, and so I was able only to have the former in jelly form and the latter in preserved from. Many of you are probably familiar with guava paste or guava and cream cheese pastries as the flavor combination is rather popular. I never tire of the taste, perhaps because like Proust’s madeleine, it reminds me of childhood. My mother and I used to have “tea time,” whose fare always consisted of toast spread with butter and jalea de guayaba and topped with a slice of cheese. 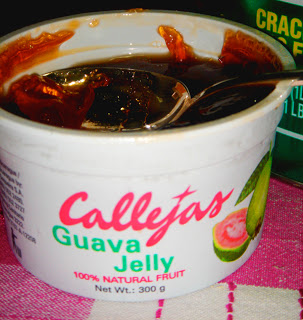 Jocotes bring to mind olives with great big pits. During semana santa (Holy Week) they are available everywhere, their bare-branched mother trees decorated with clusters of the sour green fruits. My grandfather has a farm in Granada and during semana santa huge basketfuls of mangoes and jocotes would be brought from there and lined up down the corridor. I would eat one after the other, wincing as the too sour ones wore down the enamel on my teeth and sucking greedily on the ripe red ones that were a prize to find buried in the multitude. Jocotes en miel are the preserved variation and it is all I could get in early February. If March jocotes recall the hot months, these honeyed bites are bits of waning summer. 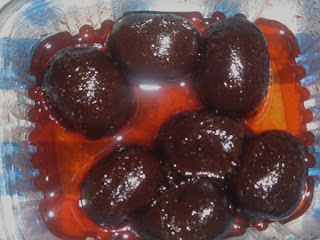