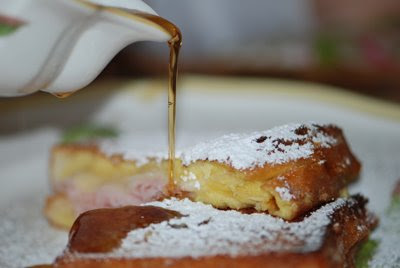 My first restaurant meal as a resident of Massachusetts took place at a popular spot in Cambridge. It was, regrettably, only so-so. Had it not been for the fantastic people we brunched with, the experience would have rated slightly lower.

The menu had the usual eggs Benedict, steak and eggs, French toast, etc. I went for the Monte Cristo and this is where the cucumber begins to turn into a pickle. When the waiter took my order, I said, “Just to be clear, this sandwich is egg-battered and fried like French toast, yeah?” And he said, “No, it’s grilled ham and cheese, topped with a fried egg.” To which I replied, “Well then, that’s more of a croque madame than a Monte Cristo, isn’t it?” Waiter: “No, it’s a Monte Cristo.” I’d already decided on having the sandwich, despite its inaccurate handle, but the Hermione Granger in me really wanted to let this man know that Monte Cristos and croque madames are like the proverbial apples and oranges: “Sorry, but those are two totally different sandwiches.” Mercifully, the waiter didn’t kick me out of the restaurant, and just shrugged his shoulders and continued taking orders.

Right then and there I decided I needed to set the record straight in my own kitchen and create a semantically and anatomically correct Monte Cristo. I did some online research and was surprised at the scanty results that turned up, and even more surprised that no one could agree on the true origins of the that sandwich. I had secretly hoped that Alexander Dumas had snacked on them while writing his novels and liked them so much that he’d named one of his most beloved characters after them…

The fact is there are a variety of versions out there, the majority calling for turkey and Swiss, others ham or chicken and Swiss, and one recipe, from Bennigan’s Grill and Tavern incorporated both turkey and ham, as well as Swiss and American cheeses. The one common thread among these was that the sandwiches were egg-battered and fried, dusted with confectioner’s sugar, and served alongside fruit or fruit compote. I consulted Joy of Cooking as well but found that they go batter-free, which with all due respect, is unacceptable. Given the range of interpretations, I decided I had free rein to assemble a Monte Cristo of my own design, and I was deeply satisfied with it.

1. Butter one side of each bread slice.

3. Heat a large sauté pan on medium-high and add vegetable oil (you’ll have to eyeball this – there should be enough to lightly fry the bread).

4. Dip the buttered side of two bread slices in the egg mixture and allow to soak, about 15 seconds. Place the battered side in the oil and immediately top one slice with cheese and ham. Make sure the heat is not too high: the bread should brown slowly to allow the cheese to melt; there is nothing worse than a hot sandwich with a cold filling. Cover the ham and cheese with the second slice, and flip to continue browning.

5. Cut sandwich in half, sift powdered sugar over it, and serve with warm maple syrup. 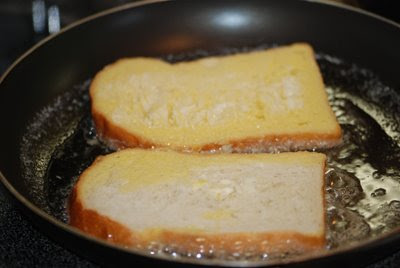 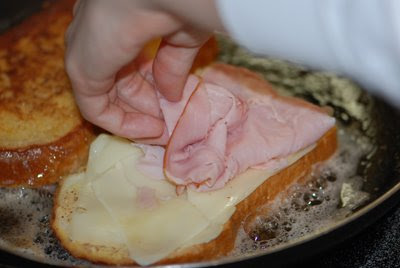 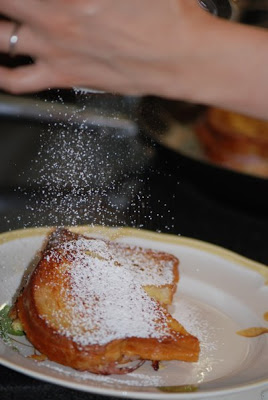 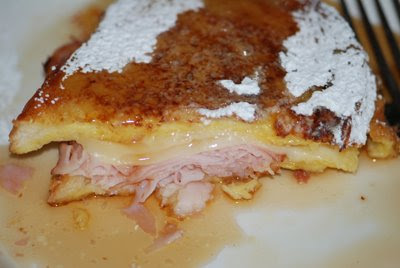