If you were wondering what finally happened at the airport, here it is:

I succeeded in my plan to have a healthy breakfast and ignore BK and McDonald’s. Ignoring BK was east, as there is no outpost at EWR. McD’s was a a feat: you can access it via two counters, one in the main corridor and the second within the actual food court. Also, there is a 12-foot Ronald over the counter windows, smiling his big red smile, arms wide open in welcome, fingers spread out, beckoning! Am quite certain there are subliminal messages calling out to innocent passersby… “Coooooome to meeeee….” Struggling with my inner Greedy Smurf I marched resolutely to my gate.
By 10:00am my stomach was grumbling and I had a bagel, but I thought it was a much better choice than a hashbrown patty.

Once on the plane my sacrifices were proven to be for naught: the lunch trolley rolled down the aisle bearing lunch – a microwaved burger with American cheese in a cellophane wrapper was handed to each passenger. I craned my neck and peeked through the space in the seats in front of me, and, unsavory as the thing looked, I smiled and eagerly reached out my paw when the flight attendant said perkily, “Burger?!”

I was expecting to taste public school cafeteria, but it was, shockingly, a slight improvement on that childhood nightmare.

The best part was the wrapper. This uniquely American creation (its being microwavable was just the icing on the cake) was manufactured by a company whose logo is a little, mustachioed chef by the ultra-French name of Pierre! 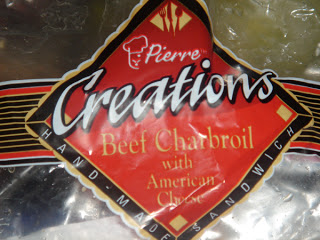