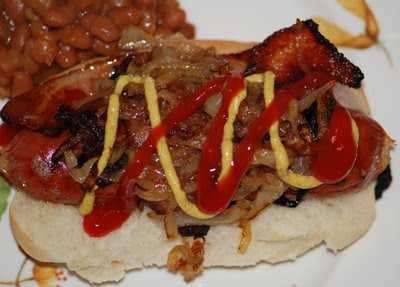 Ever since my return from LA I’ve been thinking on the bacon-wrapped hot dog. As that ultimate of downtown delicacies doesn’t exist in my current place of residence, I would have no choice but to recreate it in the confines of my kitchen. Last week, as the object of my consideration became an obsession, it became a tentative item on the week’s dinner menu. Though I was eager to undertake Mission Bacon Dog, there were details that needed to be sorted out, for instance: What variety of frank would be the best? How thick did the bacon it would be draped in be? Also, what garnishes should top it? In LA it was a veritable Mexican parranda, with guacamole, grilled jalapeños, and sautéed onions and peppers, but did I want a different, more personalized theme?

I started researching garnishes and was in the midst of studying homemade pickling, when suddenly, at 6:00pm on Wednesday last week, my ruminations came to a jaw-grinding halt: I discovered there was no Spanish chorizo to be had at Whole Foods. Spanish chorizo was the key ingredient in the recipe I’d intended for dinner, and without it, I had nothing.

Plan B-less, I looked around in a panic. It was getting late, the after-work crowd had descended, Señor O was growing irritable, and though I kept pressing myself into the corner of a cereal display, shoppers trying to squeeze past were giving me the stink eye. I kept staring at the bins of salami, willing them to transform into the chorizo I needed, but salami they obstinately remained.

I’d had ample opportunity to view the stacks of hot dog packs while on my desperate search for chorizo, and knew all I had to do was reach out and grab one, but truth to tell, I didn’t want that particular Wednesday to be Mission Bacon Dog night because all the variables weren’t in place, but I was between a rock and a hard place – i.e. Señor O’s glare – so I caved in and bought a package of all-natural Wellshire Frank beef hot dogs, a few slices of Whole Foods bacon, and a bag of buns.

Now, another of the questions I’d been pondering was how to keep the bacon in place while the wiener cooked. There were no sticks or strings on the LA one, and I was determined not to cheat. I was concerned, however, because the bacon was a little too thick and a bit raggedy to boot. Also, I’d had to use one-and-a-half slices per sausage because one wasn’t enough to spiral around the whole thing.

I assumed/hoped that the tacky quality of the meats would be enough to adhere them to each other, and to my surprise, the bacon held even after I gently laid two blanketed dogs in the skillet. A mound of onions that I’d set to cook earlier was melting into a caramelized pile while the bacon dogs sizzled and released a deliciously porky aroma. 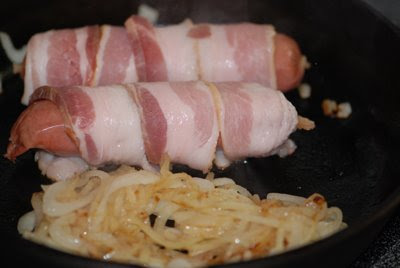 Everything in its place.

The Mission was going smoothly until I tried to turn the hot dogs; the bacon started to peel off. With the help of tongs and a spatula, I did the best I could to keep the hot dogs clothed, but it they were beyond help. We were starving by this time and the smell of frying bacon and onions was overpowering. 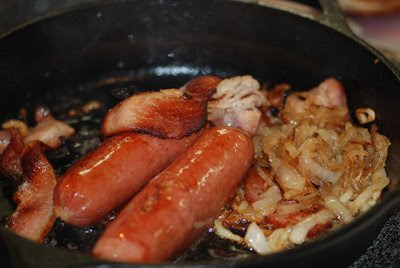 I finished stripping the hot dogs and waited for the whole mess to brown, then I stuffed a hefty helping of the dripping mess into a warm bun and settled down to a dinner that would make those LA vendors proud. 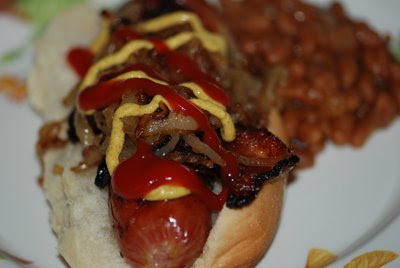